Greetings Forgeborn, and welcome once more to Just For Funsies.

But before we start, a couple of non-JFF related comments. As those of you who have been here before have probably noticed this site has had a slight make over and rebranding. I launched the blog as a place to talk about all kinds of games, and had kind of envisioned a slightly broader range of topic (some D&D, some DTCG, some paper TCG, a bit of board game stuff, and so on). However, I quickly realised that the lions share of content was SolForge related. Barring a few JFFs for Eternal, I found that it was a struggle to get motivated to write, let alone think of topics to write about. So to make it easier to write for (and avoid spreading my reader base too thin) I have made the call to drop all non-Forgey stuff.

I have also gone for a fresh look as well- I personally like the light text on dark background, but the other way round is meant to be better for your eyes and I want you all to enjoy my writing without hurting you. See- all heart, me…

Secondly I want to take the opportunity to thank everyone still active in the SolForge community- from Kaelari and his whole team who work hard to keep bringing us bigger and better stuff (I’m particularly happy with how KUSC is coming along; Kael and Naviln are both working wonders there and when I play on PC it is the one that I use most, and I just look forward to having it on iOS as well) right through to all of the players that still populate the queues (and I’m sure that numbers have actually crept up a bit lately, which can only ever be a good thing), all those still engaging on social media, and everyone that has taken the time to come here and read what I have to say. It is gratifying to see the readership figures (especially as I have never really done anything like this before) and hope to be seeing you all for a long time to come.

And finally, a quick personal plea to you, the community at large. SolForge does appear to be on the rise again. Like I said, player numbers appear to be going up, more content is on the horizon (Set 8 hype! No info, no timeline, but Set 8 hype!), we have new Weekend Warriors and WWs have been extended to week long events (smart move there, by the way). There are now multiple UIs, catering to different needs and tastes. But what we need now is more engagement and more content from the rest of the community. Post on social media. Visit the SolForge forums. Visit the reddit or the ladder. If you are feeling ambitious, start a new blog or website. If you think an anecdote is really cool or funny, share it. Those that are able to, stream the game. Share screenshots or YouTube videos. Start new teams. Let us make our game and community the best it can be.

Thank you for listening, and now to your scheduled reading.

Howling Angel is an old deck of mine that has been tinkered with on and off since early 2015. A creature-light AN control deck, the idea is to use a combination of Ambriel Archangel and a whole slew of spells to nullify your opponent’s board, drop Lucid Echoes and Energy Surge to enable you to draw as much of your deck as possible each turn, Metasight and Perilous Insight to level all of your cards up, then kill them with repeated Howl of Xith. This deck is not one to reach for if you want a quick game, and may only really appeal to you if you enjoy pulling the wings off of flies.

Previous versions were, I’m embarrassed to admit, hindered by an horribly inflexible approach. By the time I built this deck I had quite a few years of TCG theory in my head, even if precious little practical experience, and I at least knew some of the bigger pitfalls to avoid. And inexplicably I threw it all out the window for the deck. I restricted myself to only three copies of Ambriel, but no other creatures. The deck had to be as close to mono Alloyin as possible, so I only allowed myself the three copies of Howl (and I also insisted that the Howl had to be the wincon- I would frequently Energy Prison my own Ambriel to stop it hitting). And I became fixated on nullifying, Prisoning and debuffing creatures instead of killing them. I told myself that it made more sense this way. If their creatures have a negative value for their attack, they can’t kill me. If their creatures are defendered, they can’t hurt me. And in the late game, it wasn’t unknown to draw all three leveled up Energy Prisons and be able to nullify their plays while still leaving my two plays open for either more debuff, more Lucid Echoes, or the Howls.

In my defence, it actually worked better than I had any right to expect. The win rate was around the 30% mark, which isn’t really that good and for most decks I would have written it off and moved on to pastures new, but also not a complete failure and the deck held a strange appeal that never fully left.

But in very recent history I have started to make a more concerted effort to get better at SolForge, and one way that I wanted to do that was to go back to Howling Angel and actually make it work. I dropped the unnecessary self-inflicted restrictions and tried to make a deck to be proud of. And I like to think that’s what I’ve done. 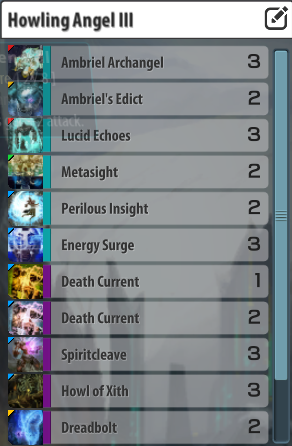 As a job, creature control has been returned to it’s more customary Nekrium home with full playsets of the old faithful Current and ‘Cleave pairing backed up with two-ofs of Edict and Epidemic (for mass removal) and Dreadbolt and Vyric’s Embrace (pinpoint removal).

Leveling remains a pair of pairs- Metasight becomes free at 2nd level, and the Perilous’ thin the deck nicely. As long as your opponent isn’t too aggressive, they should be fine in Rank 1 and even better in the late game. If you don’t see any of them in Rank 1, you may just have a problem though.

Ever since it took a hit in Stoneblade’s own big card shake up Energy Surge has seen much less play, and Echoes are unusual as a three-of; most decks that run it keep it to two or less, but you really do need to be drawing as much as possible with this deck, to make sure you draw into the answers you need. Between the two cards, you should be able to meet all of your drawing needs, and the Surge gaining overload at level 3 just helps to thin out the deck.

And finally, of course, you have the two cards that the deck is named for. Ambriel is still a potent go to when slowing down aggressive decks and has a reasonable body (especially with the proc), and Howl is a great finisher that requires no leveling to make it work.

The deck isn’t perfect- Zimus and Immortal Echoes can cause major problems (whereas the original was actually better- leaving your opponents side of the board gummed up with neutered creatures does leave no room for spawning), as can hyper aggressive decks. If you find that you are facing a lot of Zimus, dropping the Embraces and possibly Edicts for Metasculpts and Wipe Cleans will help a lot. Against the aggressive decks, there is a lot less you can do; all I can suggest is again replacing the Embraces with a third copy of Epidemic, Edict, and/or Dreadbolt.

So there you have it- another deck to go on the list of Decks People Love To Hate and two really really important lessons: Never forget your basics, and if a deck doesn’t work don’t be stupid and change it.

Thanks again for reading and I’ll see you in the queues!

View all posts by Urza Antilles

This is a text widget, which allows you to add text or HTML to your sidebar. You can use them to display text, links, images, HTML, or a combination of these. Edit them in the Widget section of the Customizer.